"Once this war is over, the Jews should go down to Gaza and reclaim their homes and businesses they were brutally uprooted from in 2005. The Gazans want to go, and the Jews want to go home. There is a peaceful solution." (HOW DARE ANYONE CALL A JEW A NAZI?!) 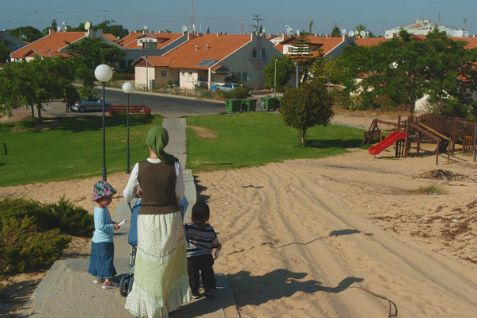 A family looks at their home in Neve Dekalim (Gaza) before it was destroyed in the 2005 Disengagement.
Photo Credit: Nati Shohat/Flash90

As the IDF cleans up Gaza from the terror tunnels, and destroys the rocket launchers, it’s considering the next phase, which is the eradication of Hamas itself.

Meanwhile, the world is eagerly looking forward to the next round of financing of Gaza, with the US and Qatar already promising $47 million dollars in aid. Which is of course a bad investment, because if nothing radically changes on the ground, it’s only a matter of time, before the IDF will need to destroy everything again in the battle against Palestinian terrorism.

There’s a stupid line that often repeated: Israel can’t get rid of Hamas (or Arafat, or the PA…), because whatever replaces it might be worse.

It’s a stupid line, because we have the option and the ability to decide what will replace Hamas. The question is, do we have the will to make it so.

What’s clear is that the IDF will have to stay in the Philadelphia Corridor that separates Gaza and Egypt.

The Palestinian Authority certainly can’t be trusted to guard the border, just as they can’t be and aren’t trusted in Judea and Samaria (just last week, a weapons shipment was caught as it was being transported across the Dead Sea).

It’s also clear that the IDF will need to stay inside Gaza too (whether we do or don’t is another question).

But as we are almost 9 year to the day that the Jewish residents of Gaza were expelled from their homes in the Disengagement, maybe it’s time to consider something else.

To me it is clear that it’s time to correct the evil done to our fellow citizens and to ourselves, and return to our homes in Gush Katif and Gaza.

To begin with, the US, the EU, Qatar and everyone else should be clearly told, don’t waste your money rebuilding Gaza.

Before the war, 70% of Gazans wanted to leave. I’m sure that percent is even higher now.

Use that international aid to relocate them. They want to leave. Help them in the way they actually want to be helped, not in a way that perpetuates the conflict.

Why throw more money into a bad solution that maintains the problem, when there is a clear solution, that all the parties want, that will end the conflict?

And secondly, once this war is over, the Jews should go down to Gaza and reclaim their homes and businesses they were brutally uprooted from in 2005.

The Gazans want to go, and the Jews want to go home. There is a peaceful solution.

How about trying something different for a change.