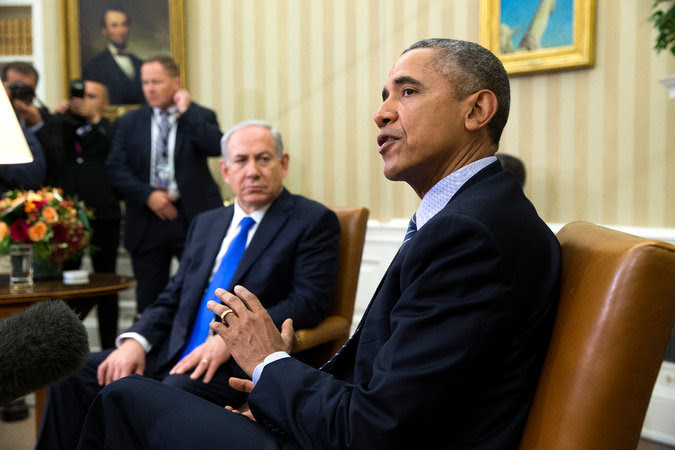 President Obama meeting with Prime Minister Benjamin Netanyahu of Israel in the Oval Office in November. CreditDoug Mills/The New York TimesWASHINGTON — With the Obama administration in its final year, several officials have said that the president has grown so frustrated with trying to revive Middle East peace talks that he may lay down his own outline for an Israeli-Palestinian two-state peace agreement, in the form of a resolution in the United Nations Security Council.

If that happens, count on two reactions: Israel’s prime minister,Benjamin Netanyahu, will oppose it, and a chorus of American politicians and commentators will suggest that it would be unprecedented — even unthinkable — for an American president to support a Security Council resolution that Israel opposed, rather than veto it.

Last spring, when similar reports circulated, Senator John McCain of Arizona said that such an action would “contradict American policy for the last at least 10 presidents of the United States.” The Republican chairman and ranking Democrat of the House Foreign Affairs Committee joined in a letter protesting that “for decades the U.S. has used its U.N. Security Council veto to protect Israel from undue pressure at the world body.” A bipartisan group of senators agreed, seeking assurances that the policy would not change.

Remarkably, the assumption beneath those protests — that President Obama would be committing an unprecedented betrayal of the American-Israeli relationship if he did not block every Security Council resolution that challenged the actions or positions of Israel’s government — has gone unchallenged.

Yet it flies in the face of truth. Over seven years, Mr. Obama has not permitted passage of any Security Council resolution specifically critical of Israel. But a careful examination of the record shows that, since 1967, every other American president allowed, or even had America vote for, Security Council resolutions taking Israel to task for actions and policies toward the Palestinians and other Arab neighbors.

During Lyndon B. Johnson’s administration, the Security Council adopted at least seven such resolutions; in Richard M. Nixon’s, at least 15; in Gerald R. Ford’s, two; in Jimmy Carter’s, 14.

The number peaked at 21 in Ronald Reagan’s administration, when the United States voted in 1981 to condemn Israel’s air attack on an Iraqi nuclear reactor, a strike intended to thwart Iraq’s nuclear ambitions. That resolution also called on Israel to place its own nuclear sites under international safeguards. The Israeli cabinet responded that “with profound regret, we note that the United States, our friend and ally” had “lent its hand to the grave wrong done to Israel.”

Other resolutions passed during the Reagan administration criticized Israel’s annexation of the Golan Heights, its military activities in Lebanon, its operations against the Palestine Liberation Organization in Tunisia, and its activities in the occupied territories. A recurring theme in several unchallenged resolutions asserted that the Fourth Geneva Convention, adopted in 1949, applied in the occupied territories, and explicitly included Jerusalem in that category. The convention states that an occupying power “shall not deport or transfer parts of its own civilian population into the territory it occupies.” In effect, the United States permitted resolutions saying that all Israeli settlement in the West Bank and East Jerusalem violated international law.

Under President George H. W. Bush, the council adopted nine resolutions critical of Israel, including a condemnation of Israeli security forces after more than 20 Palestinians died and 150 other civilians were wounded at the holy site in Jerusalem known to Israelis as the Temple Mount and to Muslims as the Haram al-Sharif. Israel’s ambassador to the United Nations denounced the resolution as “one-sided,” saying it “completely disregards the attack against Jewish worshipers on the holiday of the Sukkot at the Western Wall” and rejecting United Nations involvement in “any matter relating to Jerusalem.”

Other resolutions that the first Bush administration allowed to pass criticized Israel’s deportation of Palestinians and its kidnapping of a Lebanese religious leader.

The number of such resolutions fell to just three during Bill Clinton’s presidency, which was characterized by promising Israeli-Palestinian peace efforts, and then rose to six under George W. Bush, whose term in office saw increased violence with the outbreak of the second intifada. In May 2004, one such resolution, also deemed “one-sided” by Israel, condemned Israel’s demolition of Palestinian homes in Gaza. Another, in March 2002, called for a cease-fire and a withdrawal by Israeli forces from Palestinian cities they had re-entered to stem the uprising; Israel protested that the resolution lacked “a similar call for an end to terrorism in all its forms and in particular suicide bombings.”

President Obama, in contrast with his predecessors, has completely shielded Israel from such resolutions. This fact is all the more striking given that his presidency has overlapped with governments that have been among the most right-wing in Israel’s history — governments that have continually and openly defied American-led peace efforts and American policy opposing settlement expansion.

The rationale behind Mr. Obama’s United Nations policy was hinted at in 2011, when the United States vetoed a draft resolution related to Israeli settlements. In remarks explaining her vote, Susan E. Rice, then the United States ambassador to the United Nations, made clear that the administration objected to the resolution not over its substance, but over concerns that it could poison efforts to foster peace negotiations. In other words, the administration hoped that vetoing the resolution would encourage the Netanyahu government to engage more constructively in peace efforts.

Every weekday, get thought-provoking commentary from Op-Ed columnists, The Times editorial board and contributing writers from around the world.

The two-state solution is the only path to preserving Israel’s security and its character as a Jewish state and a democracy, while delivering freedom, dignity and sovereignty to the Palestinians. We can hope that President Obama may now recognize that preserving this solution for the future is the most important legacy he can leave in this arena. But to accomplish that, he must be willing to resist, rather than court, the anti-peace bullies in Israel and the United States; he must be willing to stand up for American interests in obtaining a Middle East peace, and to stand with America’s allies in the Security Council in supporting a two-state solution.

If he does that, President Obama will not be betraying Israel. He will be Israel’s true friend. And he will walk in the footsteps of all eight other presidents since 1967, Democrat and Republican alike.

Lara Friedman, a former United States foreign service officer, is the director of policy and government relations for Americans for Peace Now, which is affiliated with the Israeli organization Peace Now.