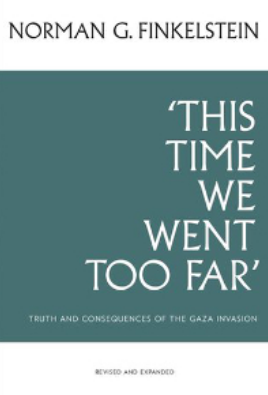 This Time We Went Too Far

TRUTH AND CONSEQUENCES OF THE GAZA INVASION

For the Palestinians who live in the narrow coastal strip of Gaza, the Israeli invasion of December 2008 was a nightmare of unimaginable proportions: In the 22-day-long action 1,400 Gazans were killed, several hundred on the first day alone.

And yet, while nothing should diminish Palestinian suffering through those frightful days, it is possible something redemptive is emerging from the tragedy of Gaza. For, as Norman Finkelstein details, in a concise work that melds cold anger with cool analysis, the profound injustice of the Israeli assault was widely recognized by bodies that it is impossible to brand as partial or extremist.

Amnesty International, Human Rights Watch, and the UN investigation headed by Richard Goldstone, in documenting Israel’s use of indiscriminate and intentional force against the civilian population during the invasion (100 Palestinians died for every one Israeli), have had an impact on longstanding support for Israel. Jews in both the Unites States and the United Kingdom, for instance, have begun to voice dissent, and this trend is especially apparent among the young.
Such a shift, Finkelstein contends, can create new pressure capable of moving the Middle East crisis towards a solution, one that embraces justice for Palestinians and Israelis alike.

This new paperback edition has been revised throughout and includes an extensive afterword on the Israeli attack on the Gaza Freedom Flotilla which resulted in the deaths of nine activists and further strained the loyalty of many of Israel’s traditional allies around the world. It also contains a brand new appendix in which Finkelstein dissects the official Israeli investigation of the flotilla attack.