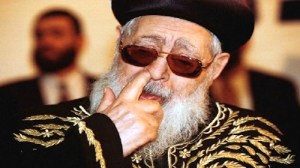 Palestinian Authority Chairman Mahmoud Abbas and the United States and British ambassadors to Israel have been paying tribute to one of the vilest, most racist and women-hating warmongers the world has ever known.

Upon learning that Rabbi Ovadia Yosef, the leader of Israel’s Sephardic Jewish community, had bit the dust, Abbas reportedly asked a group of Israeli parliamentarians whom he was meeting at the time to send his condolences to the rabbi’s family “in the name of the Palestinian people”, the Times of Israel reports

The defunct Yosef was openly racist and believed that the Jews were a master race and that God had created the rest of humanity to serve them. In a sermon on 16 October 2010, he said:

Why are gentiles needed? They will work, they will plough, they will reap. We will sit like an effendi and eat.

Yosef believed that death has “no dominion” over non-Jews in Israel.

With gentiles, it will be like any person – they need to die, but [God] will give them longevity. Why? Imagine that one’s donkey would die, they’d lose their money. This is his servant… That’s why he gets a long life, to work well for this Jew.

However, the vile rabbi reserved his worst venom for the Arabs, especially the Palestinians, whom he likened to “venomous snakes” and believed should be annihilated.

“It is forbidden to be merciful to them [Arabs]. You must send missiles to them and annihilate them. They are evil and damnable,” he was quoted as saying in a sermon delivered on 9 April 2001 to mark the Jewish festival of Passover.

“The Lord shall return the Arabs’ deeds on their own heads, waste their seed and exterminate them, devastate them and vanish them from this world,” he added.

Ovadia Yosef was a vile bigot, the odious content of a poorly flushed lavatory. He deserves no more praise than the leader of a neo-Nazi gang, the Ku Klux Klan or the white supremacist Afrikaner Weerstandsbeweging.

As for Abbas, who has paid tribute to the racist rabbi “in the name of the Palestinian people”, Yosef believed that he “and all these evil people [the Palestinian leadership] should perish from this world” and that “God should strike them with a plague, them and these Palestinians”.

Yosef’s racism was almost matched by his contempt for women. “A woman without sons,” he believed, “is worth nothing… sometimes you hear at the ladies section in the synagogue the women babbling. What about? The one tells the other how beautiful her dress is… this is their brain.”

However, Yosef’s bigotry was clearly not enough to stop the hypocritical and otherwise political-correctness-obsessed officials of the US and Britain from heaping praise on the vile racist.

“Rav Ovadia Yosef was a spiritual leader to hundreds of thousands, if not more, a great studier [of Torah] and a wise and learned man, a father to an impressive family and an important contributor to the society and politics of the state of Israel,” brayed US Ambassador Dan Shapiro in a statement in Hebrew. “Today in Jerusalem and all across Israel, his supporters and followers mourn him. To them, and first and foremost to his beloved family, I send my condolences. May his memory be blessed,” the American pimp added.

“I had the honour of meeting him, and of seeing his extraordinary spirit and learning,” Britain’s Jewish ambassador to Israel, Matthew Gould, said of his co-religionist. “I was honoured to witness first-hand his love for mankind and his wish for peace. I send my sincere condolences to his family, Chief Rabbi Yitzhak Yosef and the whole of the Shas movement,” howled the UK’s dual loyalist.

May eternal shame fall on the shameless quisling Abbas for besmirching the name of the Palestinians and on the Zionist pimps of Washington and London who have betrayed their peoples to a foreign rogue state.

Ovadia Yosef was a vile bigot, the odious content of a poorly flushed lavatory. He deserves no more praise than the leader of a neo-Nazi gang, the Ku Klux Klan or the white supremacist Afrikaner Weerstandsbeweging.

Would these worthless hypocrites have dared heap such tributes on Yosef had he been an Arab or a Muslim who had ushered the same racist filth against the Jews?