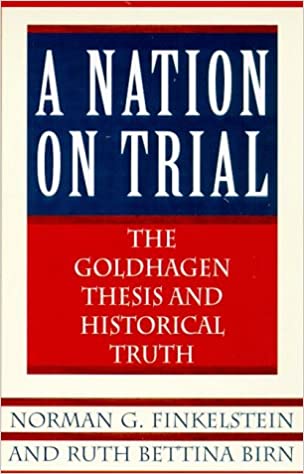 A Nation on Trial

No recent work of history has generated as much interest as Daniel Jonah Goldhagen’s Hitler’s Willing Executioners. Purporting to solve the mystery of the Nazi holocaust, Goldhagen maintains that ordinary Germans were driven by fanatical anti-Semitism to murder the Jews. An immediate national best-seller, the book went on to create an international sensation.

Now, in A Nation on Trial, two leading critics challenge Goldhagen’s findings and show that his work is not scholarship at all. With compelling cumulative effect, Norman G. Finkelstein meticulously documents Goldhagen’s distortions of secondary literature and the internal contradictions of his argument. In a complementary essay, Ruth Bettina Birn juxtaposes Goldhagen’s text against the German archives he consulted. The foremost international authority on these archives, Birn conclusively demonstrates that Goldhagen systematically misrepresented their contents.

The definitive statement on the Goldhagen phenomenon, this volume is also a cautionary tale on the corruption of scholarship by ideological zealotry.